Pre-pandemic shutdown, Mark Coffin appeared in”Confidence (And The Speech)” a new play, written by Susan Lambert Hatem and directed by Hannah Ryan (Hamilton, An American in Paris) as Vice President Walter ‘Fritz’ Mondale, in a limited engagement at Theatre Row on 42nd. Street in New York. Previously, Mr. Coffin worked in the company of “The Cake” at Manhattan Theater Club as understudy for the role of Tim. “The Cake”, with star Debra Jo Rupp (“That ’70s Show”, “This Is Us”) was directed by MTC Artistic Director Lynne Meadow and written by Bekah Brunstetter (Producer and writer, “This Is Us”) played New York City Center’s Stage One.

During the Covid shutdown of live theater, Mark was asked by Artistic Director John Tucker to become a member of Rep:Unlocked,  a London based “modern-day theatre company providing actors with a platform to live their art through performance, rehearsal, workshops and directed play-readings.” He was involved in a virtual reading of “A Thousand Stars Explode in the Sky” (William), by David Eldridge, Robert Holman and Simon Stephens, and it’s final international live performance of ‘Macbeth’, (Macduff) featuring actors based in LA, Chicago, New York and London.

Mr. Coffin starred in (and co-adapted with Heidi Mueller Smith,) the world premiere of “A Christmas Carol”, a one person performance also directed by Ms. Smith. It opened Nov. 30th, 2018 at Off-The-Wall Productions in Carnegie, PA. In 2020, Coffin negotiated with AEA and Off The Wall Theater to stream his filmed closing night performance of “A Christmas Carol” for charity, raising funds for Broadway Cares/Equity Fights Aids, The Actors Fund and The Young Center For Immigrant Children’s Rights. ‘A Christmas Carol’ remains a project close to his heart, and one that will continue to travel to new audiences in the future.

Coffin has been involved in several works-in-progress including Deborah Yarchun’s “Drive” directed by Dina Vovsi with the Civilians R&D Group; ” 100 Aker Wood” by Theodore Wolf and directed by Spencer Whale; a benefit showcase of Geoffrey Nauffts “Next Fall” directed by Sarah Spring for The Drama Club; “Steinbrenner!” produced by Keaka Productions, co‑written by Ira Berkow and Bill Madden, directed by Heidi Mueller Smith;  “The Last Laugh” by Peter and Pia Cincotti and directed by Hunter Bird (Stephen Schwartz ASCAP Showcase), “The Goodbye Party” written and directed by Kate Douglas and choreographer Brendan Duggan, “Hamlet” (Claudius) directed by John Hurley, and as Bobo in “The Grifters,” a new musical by Joe Giuffre.

Mr. Coffin can be seen in the films: “Confession” directed by Angelique Capozzi ( Starr Films, Ltd ), “By Jingo,” by Ryan Caraway, as well as “R&J: the Web Series” (as Capulet) directed by John Hurley.

Mark Coffin has performed in concert internationally from Vancouver, BC to St. Petersburg, Russia (The Hermitage) and throughout the United States (Carnegie Hall.)
He is a proud member of both Actors Equity and SAG/AFTRA.
He is a MAC Award nominee and two time Backstage Bistro Award winner.
He is also a member of The Actors Center.  theactorscenter.org 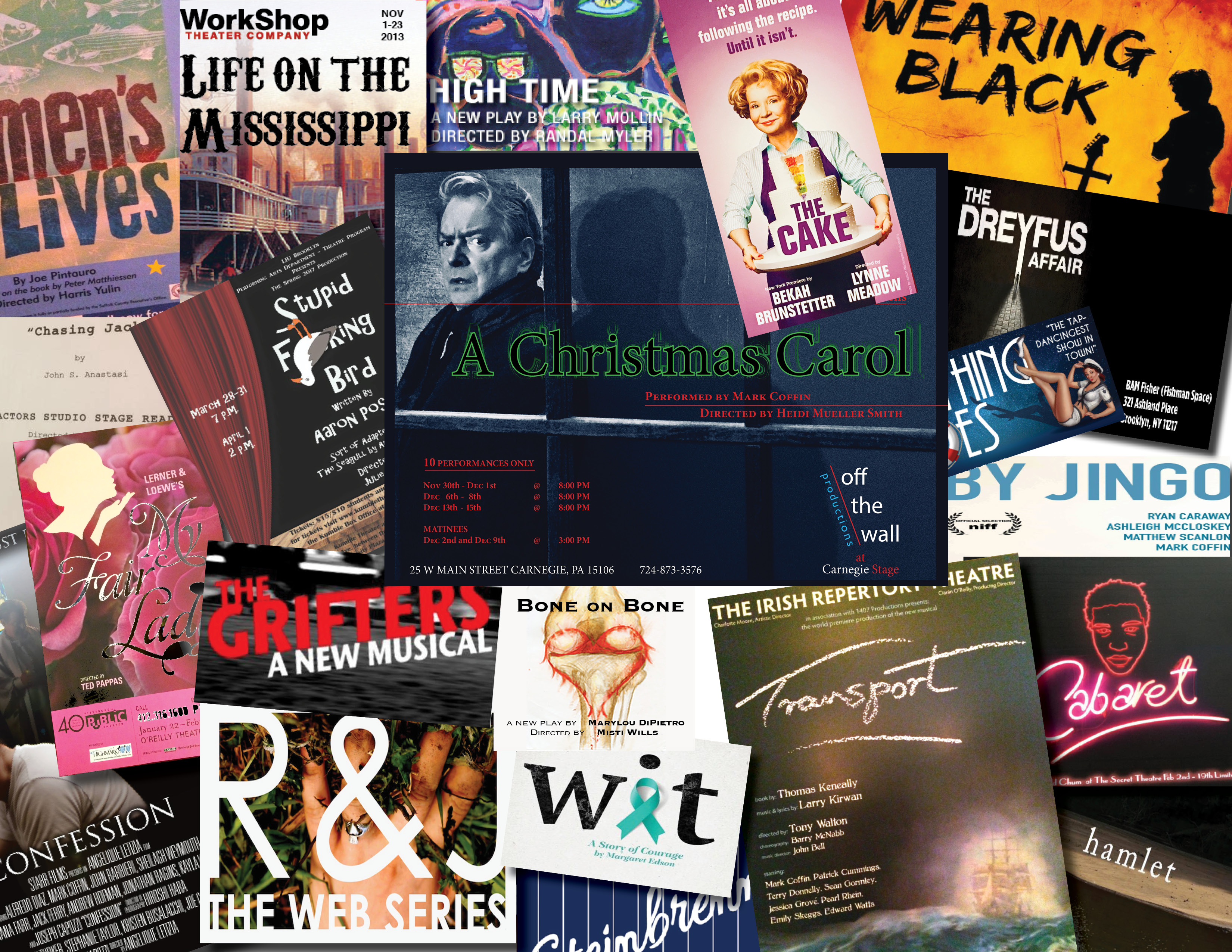